Indawgyi Lake is a secluded destination for nature lovers in remote Kachin State. The largest lake in Myanmar, Indawgyi remains pristine and undeveloped and has been designated as a UNESCO Biosphere Reserve; it’s still possible to find places where you won’t hear the drone of a motor – or even see a single boat.
The area is largely untouched by tourism, with few foreigners making the journey this far north. It’s truly a place to relax and enjoy the simple rural lifestyle and the beautiful natural surroundings. For a wider selection of photos from Indawgyi Lake, go to our Flickr photo set.

Indawgyi has also become something of an adventure destination with kayaking, trekking, cycling and recreational fishing all on offer. Inn Chit Thu (Lovers of Indawgyi) Tourism Group is a community-based organisation made up of local people that rent out kayaks and bicycles; they can also organise trekking and recreational fishing trips. Their profits go towards funding environmental conservation and community projects.

The only foreigner-licensed accommodation at Indawgyi Lake can be found in Lonton village, on the west shore. IndawMaHar guest house is a delightful spot, perched right on the lake, with a welcoming and generous manager. Facilities are fairly basic with simple rooms and a shared bathroom, but it’s low-impact and fits perfectly with the environment. There is also a military-owned guest house in Lonton and if the guest houses are full then there are homestay options nearby.

Sights around the lake

The most famous landmark at Indawgyi Lake, Shwe Myitzu Pagoda is beautiful from the water, especially as it casts its reflection in the late afternoon sunlight.

The pagoda festival held here in February or March attracts more than 100,000 people from the surrounding area. At that time of year, towards the end of the dry season, the water level is low enough that you can walk across to the pagoda from the mainland on a wooden walkway. For exact dates and full Myanmar festival listings, go to our festival calendar.

Rising from the northern shore of Indawgyi Lake, Shwe Taung is pagoda-topped hill that provides great views of the lake in its entirety. It’s only a 25 minute walk up the hill from the lake at a moderate incline, and there’s a monastery on the way where the friendly locals are likely to offer you some refreshments. Due to its distance from Lonton village, Shwe Taung can only be reached by motor boat or motorbike (it is too far to cycle or kayak in a single day). Note that motorbikes in the Indawgyi lake area can only be rented with driver (self-drive is not permitted).

There are a number of lakeside villages dotted around Indawgyi; visiting them and interacting with the local people is a highlight for most visitors. Some of the most interesting villages are listed below. Namde and Nammilaung also have houses that are home to elephants.

A note on the elephants: seeing the elephants is hit and miss. Sometimes they are away for two or three days at a time carrying logs in the forest. But if you visit the houses at both Namde and Nammilaung you might get lucky with at least one of them.

At roughly 24 kilometres by 13 kilometres, Indawgyi Lake is too big to cover by kayak in one day, but it is wonderful to be out on the water’s serene expanses, with no one in sight (or earshot). Inn Chit Thu gives advice on suggested routes that are manageable for most people and take in Shwe Myitzu Pagoda, as well as villages on the western and south-eastern shores. Experienced kayakers might want to push on a bit further.

Kayaks cost K15,000 per day to rent; there are single-person and two-person kayaks available in Lonton village.

Heading north from Lonton, you arrive at the mainland opposite Shwe Myitzu Pagoda – where you can visit a hilltop sitting Buddha and take photos of the pagoda if you don’t visit by water. Foreigners are not currently allowed to hire a motorkbike due to safety and security concerns. However, travel by motorbike within Inn Chit Thu is permitted so long as tourism officials are alerted ahead of time and you are accompanied by a local guide.

Foreigners are not able to go into the mountains on the west side of the lake due to Kachin Independence Army activity and illegal gold mining. This means that trekking routes generally start a good distance from Lonton and transport to and from the start and finish points can be pricey. The local trekking guide (guides are necessary in these mountains) costs K10,000 per day. Currently there are routes in the south-eastern mountains and the eastern mountains (behind Hepa), with more to be explored. Inn Chit Thu can provide advice.

The price of one day’s motor boat hire at Indawgyi Lake is quite high at K50,000 to K60,000. In a way, that is a blessing – as so much of Indawgyi’s appeal is the relative peace and quiet. However, if you want to circumnavigate the entire lake in one day whilst being on the water, motor boat is the only way to do it. Inn Chit Thu can also organise recreational fishing trips.

In recent years, most of the tourists who have made it to Indawgyi Lake have been avid bird watchers, and the lake has a strong reputation within that community. The lake is a major stop for migratory birds and attracts thousands of them from December to March. Even for those who aren’t enthusiasts, the sight of thousands of birds on the lake, and flying in flocks over it, is something to behold.

When to visit Indawgyi Lake

From October to December visibility is at its best, and it’s often possible to see the entire lake – most impressive in the late afternoon light. From January onwards, the visibility gradually becomes worse, getting hazy at times. But the serenity of the location remains and the arrival of the migratory birds provides its own touch of magic.

We offer a variety of tours of Myanmar that include Indawgyi Lake - find out more here. 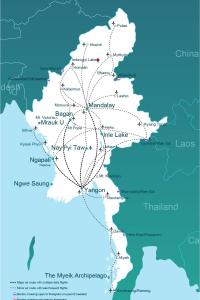 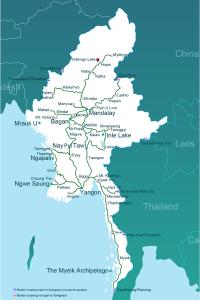 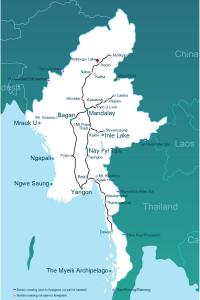 You can hire a private car from Myitkyina to take you on a return trip. The drive will be around five hours from Myitkyina to Lonton village on Indawgyi Lake, and a 3 day/2 night-return trip is recommended - click here for more information and a quote.

Select different types of transport for information and click on maps to expand.

You can hire a private car in Myitkyina to take you on a return trip to Indawgyi Lake. The drive will be around five hours from Myitkyina to Lonton and a 3 day/2 night-return trip is recommended - click here for more info and a quote.